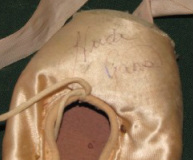 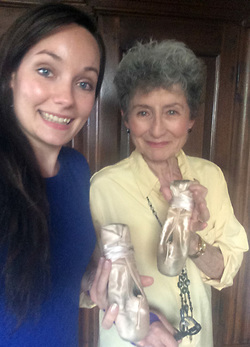 Pointe shoes autographed and once worn by ballerina Alicia Markova in a performance of Giselle, dated 1952. Gift of Ms. Irma Grant Millard, a former dancer with Ballet Theatre from 1949 to 1954.

Irma's first performances with Ballet Theatre were as a teenager during their 1949 season at Jacob's Pillow Dance Festival. She was with the company during the major tour of Europe in 1950 and over the next few years performed roles in Balanchine's Theme & Variations, Les Sylphides, Graduation Ball, Fall River Legend, Rodeo, Billy the Kid, and many others. After leaving Ballet Theatre, she went on to perform as a dancer for a wide variety of shows at the original Sahara casino in Las Vegas before opening her own ballet school in Pennsylvania.
During my visit, Irma shocked me with a gift of Alicia Markova's autographed pointe shoes given to Irma by Markova herself. In 1952, after a performance of Giselle starring Markova, Irma and her dancer friends went to the star's dressing room where Markova graciously posed for a photograph and gave her worn pointe shoes to Irma. The autograph may be faded from time, but time will not erase my sincere appreciation of this generous gift and the magnificence of the shoes. 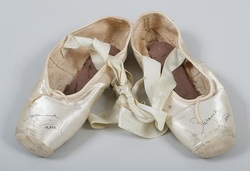 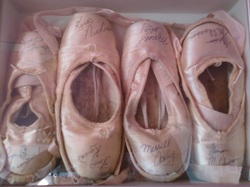 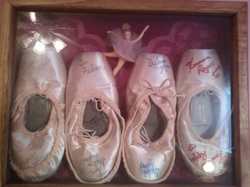